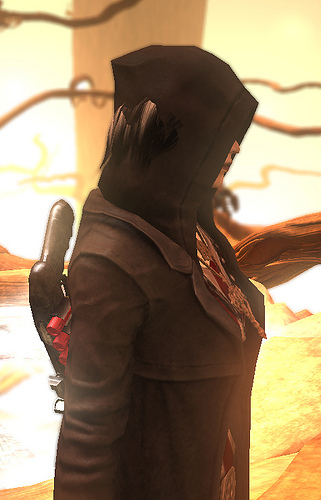 One of my hobbies outside of blogging is gaming. It goes way back for me, from ancient computer games like Wizardry and Ultima III to online games (MMOs) like World of Warcraft (WoW). I have some ambivalence about the role of gaming in my life. It’s possible that if I didn’t spend time on gaming that I’d be a better person in some way - doing more creative writing, more blogging, getting more exercise, doing something amazing in the world. It’s also possible that if I didn’t do gaming, I’d just waste time on something else.

Then I think about the beginning of Mary Oliver’s Wild Geese, one of my favourite poems.
“You do not have to be good. / You do not have to walk on your knees / For a hundred miles through the desert, repenting. / You only have to let the soft animal of your body love what it loves”
When I think about lines like this, I think that what’s important is passion, and we are fools to stifle this. And it doesn’t matter if other people approve or not.

So I’ve decided to accept gaming in my life, acknowledging its potential to consume too much of my free time and work to keep it under control and in balance.

The good thing about this is that leaves me open to experience some amazing games which can only be described as artistic. Do many people dispute that film and TV can be artistic media these days? It’s happening with games. Think movies with beautiful cinematography, compelling plots, well written and voiced characters, but with the innovation that they are also interactive, where you decide if your character will be hero or villain and what they do. It’s true there are a lot of crap games out there, just like there are crap films, TV shows, novels, blogs, paintings, plays, poems, you name it. The artistic spark is in this new media, and I think that it’s sad that so many people have decided games are just frivolous time wasters. Similar things were said about novels when they were new.

This blog is not going to morph into a gaming blog, but I have decided that it’s time to break down the barriers I’ve made which separate my gaming interests from my other interests.

I’ve been spending a bit of time on the Secret World lately. After playing games like World of Warcraft for years, it’s refreshing to play an MMO with a contemporary setting, with no Elves, Dwarves, Orcs and Trolls. Playing the Secret World is like being able to live in the Buffyverse or a gory zombie invasion. Although I have never been a big fan of games involving puzzles, I like how the Secret World has included some missions with puzzle elements. It creates a more diverse questing experience, and work well with the recurring themes of espionage and hidden knowledge.

I really like how the Secret World does factions. I was getting tired of the absolute factions which exist in WoW, where the Alliance and the Horde are at war with each other, and it’s impossible to meaningfully communicate with members of the opposing faction or enter their cities without being killed on sight. Factions in WoW have become an annoying zero sum game and it doesn’t help me that the most recent expansion, Mists of Pandaria, has a particular focus on the inter-faction conflict. Factions are less absolute in the Secret World. The choice is one of three secret societies, each with its own flavour. It’s possible to talk with members of the other factions, and even group up and run instances with them. Faction only really seems matter in the voluntary PVP battlegrounds.

The Secret World is not without its faults. I have not found its crafting system to be particularly fun or rewarding - maybe that will change as I progress further in the game. Several commentators have found its combat system unsatisfactory and difficult. As someone who has played WoW for several years and witnessed what happened to the game’s culture when everything was progressively made easier, I don’t mind the challenge of the Secret World’s combat system. I am not quite used to character progression that is without levels and clearly defined classes, but still appreciate that they’ve made a game which is quite different.

But I’m not in the mood for gaming tonight. For the first time in a while, I’m drawn to poetry.