different ways of dealing with obstacles 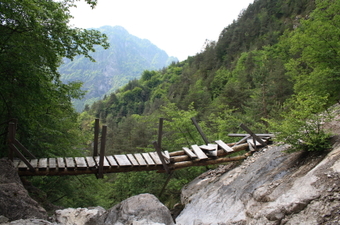 A few months back I went on a short walk to see Terrace Falls in the Blue Mountains. I wanted to try some different tracks in the area, a wish which led me to a track which was little better than a kangaroo pad along a steep hillside. Maybe it was once a good track and has slowly been going back to nature. Then there were all the fallen trees in my way. After scrambling over the third or fourth such obstacle in the space of fifteen minutes, I started thinking about we deal with obstacles on the path - and in work and life.

These are just six responses, I'm sure there are more ways than this, but this is all that came to me at the time. In no particular order:

- Climb over the obstacle or go under it. There are some problems which can be fixed if  enough people dedicate sufficient time and effort to solving the solution. This seems like climbing over the obstacle. There are other obstacles which appear imposing at first, but when analyzed calmly, it's easy enough to find a good and non-disruptive workaround, which could be liked to squeezing under the obstacle.

- Leave the track and go around the obstacle. Sometimes the only way to solve a problem is to take an unorthodox approach that is not in the procedures book. The danger is when you have to depart too far from the track. If you're not careful about returning to the track as soon as possible, you may get lost. Last year I helped somebody who had been lost in Sassafras Gully for seven hours, because he had wandered from the track in dense and confusing terrain, got lost and panicked. Sometimes the danger is not so much the possibility of getting lost, but dealing with hazardous terrain, as depicted in the photo.

- Go through the obstacle. Imagine your obstacle is a deep muddy bog. There have been times I've been able to pick a way through the bog without sinking in. This approach calls for extremely good observation of what you can get away with. Walking on mud without sinking in also demands particular delicacy, but if the obstacle is a mass of leaves and branches from a fallen tree, brute force and tenacity help. This approach can be risky, and it's advisable to have a Plan B. What happens if you do sink into the mud? Sometimes I've tried this approach with office politics, wanting to stay above it - sometimes being successful, sometimes not.

- Remove the obstacle. This can be the heroic option. Not only are you dealing with the obstacle, but you're making sure that nobody else has to. It's easy to do with little obstacles, but larger obstacles require something extra, be it strength or a chainsaw. There are sometimes unforeseen consequences to this. You might remove the obstacle from your path and it throw into somebody else's path or cause some environmental damage. Last week I was walking in Dante's Glen near Lawson and came across some track maintenance workers clearing fallen trees from the path. I was grateful for what they were doing, but I happened to be there when they rolled a huge trunk section off the track. It crushed several small trees and ferns on its way down the gully. I can't help but wonder if there had been a better way.

- Turn back and choose a different path. In the Blue Mountains there are plenty of tracks which look promising in the beginning but then deteriorate into animal pads leading nowhere. Some people turn back too soon, because the ideas of facing any obstacles is too scary. Other people are very reluctant to turn around ever. It seems like admitting defeat, that the initial decision to take this path was wrong. But after facing a huge and seemingly insurmountable obstacle or a depressing series of smaller annoying obstacles, it's worth asking the question if this path is still the right one. This could be the situation when somebody decides to leave a relationship or a job. Once you know that you are on the wrong path, it's better to cut your losses and turn around immediately. This can be quite disheartening, but hopefully the lessons learned from this wrong turn will be helpful in the future

Any of the above five approaches are fundamentally valid, they could be the best approach depending on the person or the circumstances. There's one other response I'd like to mention. This is how it goes: If you reach the obstacle, close your eyes. Close your eyes and try not to think about whatever the obstacle is. After a while - seconds, minutes, or even years later - open your eyes again, hoping that the obstacle has disappeared. If that didn't happen, just repeat and try again until the obstacle does disappear. The hope is that if you try hard enough at ignoring the obstacle, the better the chances of it going away. No, it's not a very effective method, but I'm mentioning it because it's very popular with libraries who don't like how their users have changed lately.

I have decided that it's time to re-open the explodedlibrary. I had been blogging for over five years, and have learned that it is not straight forward to just stop it. For one thing, this blog is irrevocably linked with me. Even if I deleted this blog, that would be true. When people search for me, the first thing they find is this blog. With this blog closed, it may appear that I haven't said or done anything or thought about anything since November 2007. Of course that's not true.

My life has changed during the last few months. There were some things going on last year which were making it very difficult to blog. As I wrote in the bunker,

Mergers and acquisitions happen all the time amongst organizations associated with libraries. One's happened to MPOW. Yes, mergers and acquisitions happen all the time, but a merger amongst true equals seems to be extremely rare. There usually is a dominant party and a subordinate party. It has turned out that my place of work is on the losing end of this merger. There is now an integration process underway. Integration after a merger is a strange process. The integration that I'm experiencing means that the subordinate party is completely disintegrated and then parts of it are absorbed into the dominant party and the rest is discarded.

A little over a month after I wrote that, my library had been shut down. I could have had a job in the big university library if I had wanted it, but I decided that it was a good time to move on from that university and looked elsewhere. Fortunately I found something good without too much stress and botheration. It was very painful to go through this merger - the uncertainty and lack of information about the process, the depressing thought that our users would be worse off and there wasn't anything that could be done about it.

A few months later on, I am starting to view this as one of those odd twists which life takes, and as horrible as it was to go through it then, now I can see that it has opened doors which I never would have braved.

So my life has changed. I've had enough of a break from blogging that I feel excited about getting back into it. Not that I'm going to be posting very frequently, probably three posts a month will be a very good month. I'm also working on liberariesinteract.info again, and I expect that my more conventional library posts will be going there.