Holly Throsby in Katoomba on a Sunday night

Last night I had a lovely evening watching Holly Throsby in concert at the Clarendon in Katoomba. Living in the Blue Mountains and working in Sydney is not exactly easy, but I was glad I was able to see this Sunday night concert and then be home at a reasonable hour.

The venue at the Clarendon was lovely and small. It's basically a normal restaurant room with a stage on one end. If you buy a ticket there with a meal, you're sitting at a table right by the stage. Just a metre or two away from the main microphone. But it's a lot cheaper to just see the concert, and if you book early, you can get a good seat (in such a small venue, they're all good). My group was just behind the tables.

The support act was Stephanie Dosen, originally from Wisconsin. She was great. Very chatty and funny. There was quite a contrast with her banter between songs and the actual songs, many of which were pensive and delicately beautiful. Afterwards there was quite a queue of people buying Stephanie's CD, which she was selling and autographing.

I have seen Holly Throsby in concert only once before, when she appeared as a special guest at a Sarah Blasko concert in the Seymour Theatre in April. She and Sarah sang three songs together, including an amazing cover of Eleanor Rigby. Last night, Holly was accompanied by Jens Birchall on cello, backing vocals and possibly mandolin, as well as Bree van Reyk, on drums, accordion, backing vocals, glockenspiel, bells, casio - quite the multi-tasker she was.

Holly played a few brand new songs from the album she's going to be recording in Nashville in around two months. I really liked them. The rest were a fairly representative spread from Holly's two LPs and most recent EP. She also played a cover of a Bob Dylan song, which was the only thing which didn't do much for me - probably because I'm not really into Bob Dylan.

There were a few moments which seemed a little unpolished, but I don't think anybody minded. I don't think anybody seeing Holly Throsby on a Sunday night in Katoomba expects to see something sickly slick and polished. Last night's performance was authentic and intense, with an undercurrent of poignancy. Holly spoke a little about what prompted her to write the song Under the Town and a Widow's Song, one of the new songs she played.

After the encore, Holly and Bree and Jens sold autographed CDs and these amazing little hand-drawn comic books which Holly has made as companion pieces for Under the Town and One of You for Me. 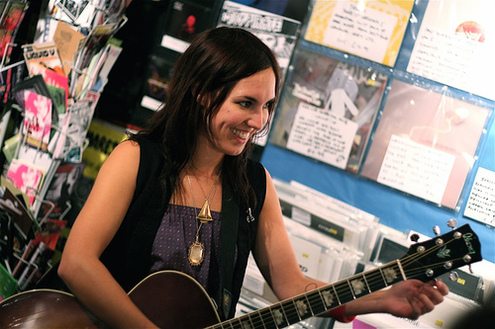 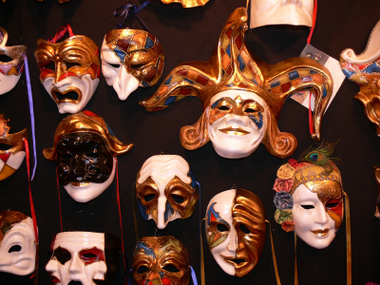 Sometimes I think that if I were starting blogging today, I would choose to write under a pseudonym. I think that I may have wanted that initially, but the blogging software I was using at the time - Radio userland - had a default of displaying the blogger's name. Before I learned how to turn that off, my name was already out there in links from other bloggers. It's interesting how little seemingly random accidents can have a lasting impact.

But I wasn't too worried that my name was out there. At first it seemed that my blogging life would always be quarantined from the rest of my life. It seemed like a long long time before I met any other bloggers face to face or anyone who had read my blog.

Of course everything's different now. I am aware that every word I write is potentially viewable by my past, present and future employers and co-workers, prospective girlfriends, exes, friends and enemies, all sorts of family members, including my mother. When I get an idea for a post, at some point I need to decide whether this is the sort of post I want to have on my blog, given all of this.

If I blogged under a pseudonym, I wouldn't have to worry about this. I could be more controversial and not worry about alienating the prejudiced and easily offended. There would be other things to worry about - namely protecting my secret identity. When writing about specific work or personal things, I couldn't be too detailed, or I would need to fictionalize some of the details (although that can be fun). I would need to keep other bloggers at arm's length, and would be reluctant to attend blogging meetups or be involved in a group like lint.

I do think that there are advantages and disadvantages to both kinds of authorship.

I don't buy into the "named bloggers are inherently more ethical and accurate" argument either. For me, the potential readership of this blog does make me feel personally accountable for my blogging - to play nice with others and not be sloppy in my research or writing. But just because it's like this for me, I can't assume that it's like this for everyone or that the converse is true - that anonymous/pseudonymous bloggers don't care about playing nice or checking their facts. Recently at MPOW I was put in a very unusual situation - of needing to find a shortlist of blogs in a subject I didn't know a lot about, project management. Although I feel very reticent about rating blogs, I devised a quick & dirty way that I could live with. Whether the blog was written under a pseudonym or by a named author was irrelevant. It's possible that under my criteria, a named blog by somebody who really has made a name for themselves may receive bonus points, but that's as far as it would go. If a blog - be it named or pseudonymous - contained mean-spirited ad hominem attacks, I'd probably rate it low for "quality" and give it negative bonus points.

Before I finish, I should probably mention that this post is my indirect response to the Annoyed Librarian's post on this. I have a lot of time for the Annoyed Librarian. We have a couple of things in common: we are both skeptics about the librarian shortage and we have both made fun of 2.0 stuff. I still think that the Library 2.0 label has done more harm than good. I care deeply about the components, which existed quite happily before anyone made up the lame Library 2.0 term. It still annoys me that these pre-existing technologies and ideas have been co-opted by Library 2.0, when I think they would have been better off left on their own. Mark my words, it won't be long before Library 2.0 sounds as cringe worthy as that mid-1990s gem "information superhighway." Where I differ from the Annoyed Librarian is that I do care about advancing much of what has been labelled Library 2.0. Because of this, I have been willing to jump on the Library 2.0 bandwagon when it's helped me communicate and work with colleagues, and then I jump off again and it's been ok.

photos of the APEC fence 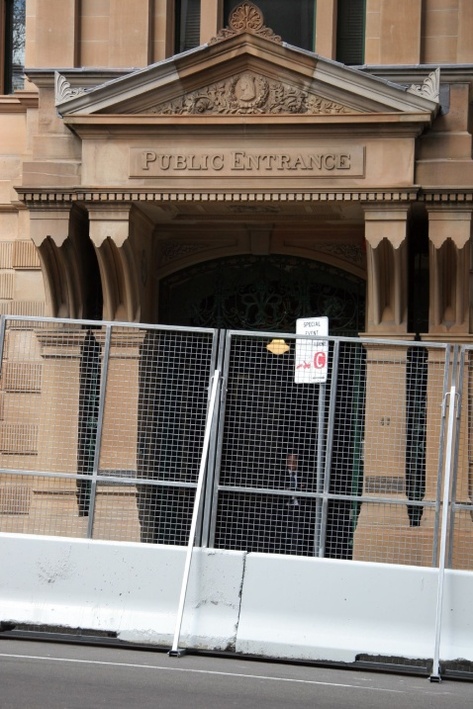 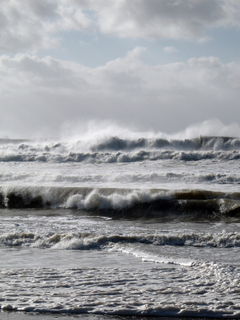 People who read this blog in readers won't see it, but I have changed the look of this blog - the first significant change in over 4 years. The change is long overdue. One reason why I kept that design for so long was that I haven't seen many blogs in yellow and white, and those colours almost seemed like a personal trademark, and so I thought that I might as well keep them. I come across way too many books and articles about branding at MPOW and I wonder if I have absorbed some of those ideas. A blog is a brand of sorts, and it pays to have some consistency of message and look. Of course, stagnation is even worse than lack of consistency. This is a very different blog from what it was four years ago, and it's about time that the look reflected that. For one thing, I now have more posts with images and so it makes sense to have a design which enhances and is enhanced by the graphics. I'm glad that I found a design which has a similar look to the old design, so there is still some consistency.

When I first chose the name of this blog, I thought that the name sounded interesting and was an apt metaphor for what was happening with information and libraries. I was not expecting that the ideas behind this metaphor would continue to develop and evolve and sweep me along with it. At first I was thinking about how I might survive and cope as chaos infiltrated my work as a librarian. Now the chaos is no longer quite so new and scary, and I am thinking about how I can use it and thrive in it.