Walt Crawford has raised the issue of blog printability again. It seems that he is irritated that no improvements have been made since the last time he raised this issue 18 months ago. I think that my position has also changed in the intervening time. Back then I felt slightly apologetic about the problem. Now I just feel defiant.

Here’s what I have to say about printability on this blog.

1. This blog is designed to be read on a screen. If a post looks bad or unreadable in a particular browser or news aggregator, I want to know about it and will try to remedy the problem when feasible. Although people may use the blog in other ways, I do not feel obliged to support these other uses from my end.
2. I never print my own blog and I would prefer that other people did not either. This is an online, not a printed publication, and for environmental reasons, I want it to stay that way. Although I would never forbid printing or actively place measures to make this blog difficult to print, I am not going to lose sleep about TypePad’s printing defect. I respectfully disagree with Walt Crawford's premise that words must be printed on paper to be fully appreciated.
3. This is a self-published blog which I write for my own purposes. Much of the time there seems to be an intersection between what I’m offering here and what readers might be looking for, but when there isn’t such an intersection, that’s ok because that’s not what this blog is about. If you’re a reader and you don’t like this attitude or me or my posts or anything else, it’s your right not to continue reading this blog. But nobody has the right to demand changes or feel entitled to lay down the mores or rules for other bloggers.

I have just returned from something I have not been to before, an album opening. The occasion was the launch of the new Sarah Blasko* album, What the sea wants, the sea will have. As much as I like music, I have not yet got into the habit of enjoying live music. It’s likely that this will change.

Tonight’s concert was something a little different. It was invitation-only concert in a small venue. How did I manage to get a ticket to something like this? It was nothing to do with blogging. I’m on Sarah Blasko’s email list and there was a competition for members of it, and I entered and got lucky. It also turned out by happy accident that I got a front row seat.

Everybody that I know who’s seen Sarah Blasko live has said that she’s an amazing performer. Despite these high expectations, I was not disappointed. Her stage presence was powerful yet also subtle and understated. It’s hard to explain. And then her mesmerizing voice and music! The time went by very quickly. I enjoyed her first album, but I would only have described myself as a lukewarm fan. After the experience of seeing her live, and also because I think the songs on the new album are stronger and more varied, the lukewarm feelings have disappeared.

* One way that Sarah Blasko is known outside of Australian music circles is that her song, Always worth it, was played in the final episode of Six Feet Under – when Claire decided she'd go to New York, despite no longer having a job waiting for her there.

Edit: See the photo gallery of this concert on the triple J website.

beyond purple cows in blogging 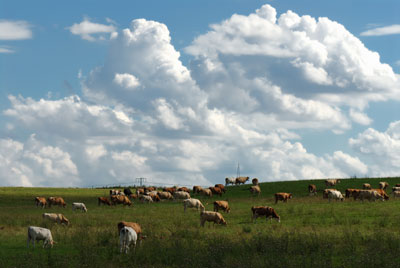 Purple cow was an apt metaphor for the first wave of blogging. Many of the first bloggers were purple cows.

Now that there are so many blogs, purple cow isn't so helpful. After all, we can't all be purple cows - not unless purple is the new brown.

Yes, every blog and blogger is unique in the same meaningless way that every person is unique.

What does it mean then? For me, the blog is not meant to help me do or achieve anything, rather the blog helps me to exist/be in this other place, the blogosphere. Could it be that one day,  we all might be expected to exist in this way to fully participate in life? It's impossible to know the answer. All I know is that I like this form and that's good enough for now.